The Sumner School Cultural Narrative was created in response to the property development work undertaken at the school as part of the Christchurch Education Renewal Plan. This property work gave the school an opportunity to consider how the cultural narrative of the Sumner area could be woven into the naming and colour choices for the buildings thus maintaining an important cultural link to our Māori tuku iho (heritage).

The Cultural Narrative was written by a group of Years 1-8 students in consultation with mana whenua following a school-wide inquiry about Tūrangawaewae (the place on which we stand). It recognises the importance Sumner (Ōhikaparuparu) had to Māori as a place to gather kaimoana (seafood).

Ōhikaparuparu is the name for the coastal area that the Sumner township sits on. A loose translation of the name is ‘place where you may fall in the mud’. The name is a warning to people that despite the variety of resources and abundance of flora and fauna in the area, if one was not constantly alert and aware of their surroundings, particularly the tides, they could get stuck in the mudflats.

The four learning hubs, Rapanui, Tuawera, Te Onepoto and Awaroa get their names from the four key landmarks that were used by Māori to identify different areas for gathering kaimoana. Rapanui (Years 0-2) was the entrance point to the fishing grounds and as such is the starting point for our ākonga (learners) as they enter our school.

As our ākonga navigate their way through the school they are guided through the landmarks of Tuawera (Years 3&4), Te Onepoto (Years 5&6) and conclude their journey at Awaroa (Years 7&8) the highest of the landmarks where they can look out on the wider world just as Māori have done for generations.

Ahakoa he iti, he pounamu: Despite being small, it is of great value.

Ko Rapanui te pūtahi o ngā ara Rau: Rapanui is the conjunction/crossroads of the many paths 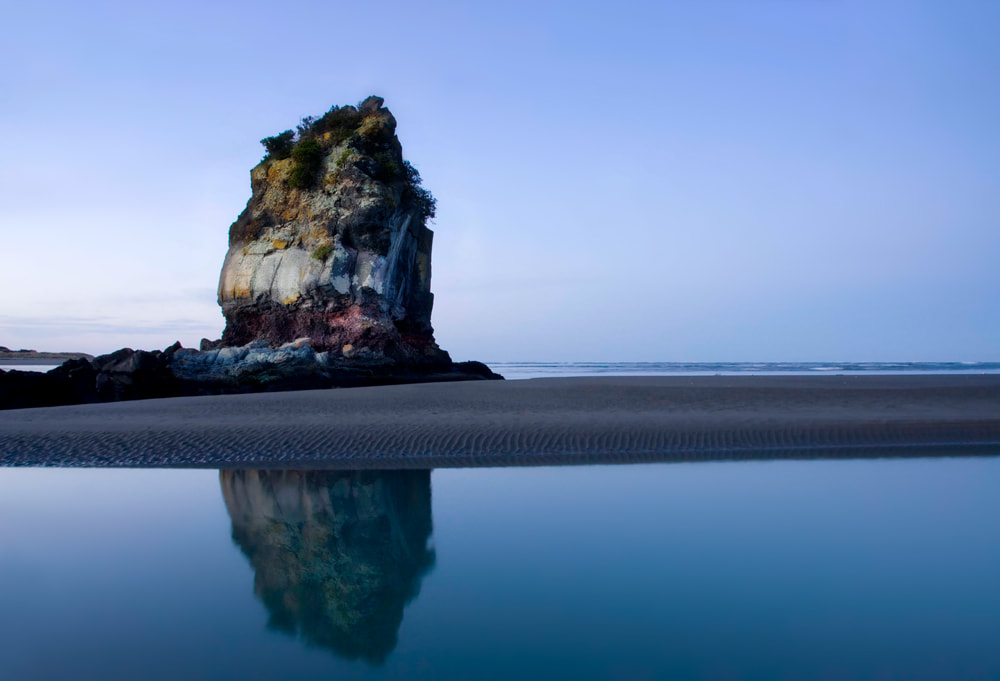 Rapanui (Shag Rock) means the ‘great sternpost’, as it was used to guide waka into the Ihutai (Avon Heathcote Estuary). The waterways were like highways with many waka coming and going. Rapanui was where waka docked, and an important sign for navigation, as travellers came in from the sea looking for the estuary.

Rapanui is one of the oldest landmarks of Te Wai Pounamu (South Island). It is a volcanic remnant, meaning it is made of cooled molten lava from one of the nearby volcanoes. This type of formation is also known as a sea stack.

Rapanui is now not as obvious, due to a large part of it collapsing in the 2011 Earthquake, but it still stands as a symbol of our community’s resilience and continues to mark the entrance point to Sumner.

The name Rapanui is often associated with being the easternmost marker sitting next to a significant settlement. It is a name that is common throughout the Pacific. For example, Easter Island also shares the name Rapanui.

The area was once rich in shellfish such as kūtai (mussels), pipi, and tuangi (cockles), fish-like pataka (flatfish), kapu (soles), and pātiki (flounder). It was abundant in birdlife including the New Zealand shoveler, kawau (shags), kūaka (godwits), and tōrea (oystercatcher). It was also a source of tuna (eels), as well as various types of harakeke (flax).

The Māori tribes in the area used harakeke in many different ways. They wove the muka (fibre) into fabrics, which they used to make cloaks, and the roots also had many antiseptic properties. They wove baskets and containers to carry the kai they had gathered.

Rapanui was chosen for the Junior School because it is the first beacon we go past coming into the Sumner community, just as the Years 0-2 is the starting point when ākonga (learners) arrive at our school. Rapanui guides younger children into our community, and points them in the right direction, as they continue their journey through their years here.

Ka ora pea i a Koe, ka ora i au: We are all important to each other.
Kua mā te waewae tūtuki, engari mā te ūpoko pakaru: Perseverance with determination. Don’t be put off by obstacles.

Tuawera (Cave Rock) continues to be a significant landmark in Ōhikaparuparu (Sumner). It was used by Māori for gathering a range of kaimoana. This place was once abundant in shellfish such as kūtai (mussels), pipi, tuangi (cockles) paua tio (oysters) making it a perfect home to torea (oystercatchers), karoro (seagulls), kotare (kingfishers) and karohirohi (yellow faced cormorant). It was also rich in karengo (an edible seaweed).

Tuawera is often associated with the story of Te Ake’s Revenge. Te Ake was a chief who lived on the shores of Akaroa Harbour. He had a beautiful daughter named Hineao. On occasion, his tribe (hapu) would trade with other local tribes. One such hapu lived near where the Ferrymead Bridge now stands around Settlers Crescent and had a chief called Tūrakipō.

One day while trading Tūrakipō set eyes on Hienao. He immediately fell in love with her and wanted to take her for his wife. Sadly, Hineao did not feel the same way and rejected Tūrakipō’s advances. When Te Ake’s hapu left for Akaroa, Tūrakipō decided that if he could not have Hinenao, then no man would. He snuck away one night and used powerful dark magic (makutu) to put a hex on Hineao.

Sadly, Tūrakipō’s hex had the desired effect and Hinenao became gravely ill. On her deathbed Hineao told her father that she had rejected Tūrakipō’s advances and Te Ake knew at once who was behind his daughter’s sickness.

Te Ake was enraged and set about his vengeance. He bitterly traveled back to Ōhikaparuparu and performed his own karakia (prayer) to hurt Tūrakipō and his hapu. The next day a mighty black whale became stranded on the sandy beach.

When the villages saw this they cried “He ika moana! He tohora nui, kua pae ki te oné!” A fish of the ocean, a great fish of the ocean – a great whale, stranded on the shore! They eagerly raced down to the beach and began to feast upon the whale for it was considered a rare delicacy.

Tūrakipō however was suspicious and thought that the whale must be a bad omen or sign. He felt that the stranded whale was the result matuku so he did not partake in eating the whale.

Tragically, Tūrakipō was right and all of his hapu died from the poisoned whale. Tūrakipō went on to live a life of solitude. In the end, Te Ake got his revenge and Tuawera now still stands as a reminder of the cursed whale.

Tuawera has been chosen as the name for the Years 3&4 Team because it reminds us of the importance of relationships, respect and working together (unity). Cave Rock remains an important landmark in our community, one that has stood solidly through centuries of strong tides, rain and wind. It symbolises the character strengths of perseverance and resilience. Tuawera has solid foundations just as the Years 3&4 Team provides a solid foundation for our ākonga (learners) as they continue their journey through our school.

Te Onepoto (Taylors Mistake) literally means a short sandy beach. Māori considered it to be one of the best fishing grounds in Ōtautahi (Christchurch).

This area was particularly abundant in shellfish such as kūtai (mussels), pipi, and tuangi (cockles). Te Onepoto was an area where Māori would gather pāpaka (crab) and could also find paua and other kaimoana that could not be found elsewhere. Many types of Ika (fish) were also found in this Te Onepoto. Green harakeke (flax) to make fishing nets and woven pots to catch koura (crayfish).

“Ko Te Onepoto te māra a Hinekarikari” (Te Onepoto is the garden of Hinekarikari) refers to Hinekarikari who was one of the wives of Tangaroa. Through their union, all shellfish found on the foreshore comes about. This whakataukī is a reference to the abundance and variety of resources once gathered at Te Onepoto.

The importance of gathering kaimoana and all food sources cannot be underestimated. Gathering and collecting food was the most important type of work for the survival of the people. Without food, people would perish.

This coastline has been a major source of food and resources since the first Māori settled in the 1500s. Because the kaimoana found at Te Onepoto was such a highly prized resource, archaeological evidence suggests that Te Onepoto was one of the earliest settlements in this area.

The caves (ngā ana) were an essential part of the reason Māori settled in Te Onepoto. The caves provided shelter to cook the kaimoana found in the nearby area. The fishermen would sleep inside them on long cold nights. Some of these caves are still used in houses today.

Whāia te iti kahurangi: ki te tūoho koe me, he maunga teitei: Seek the treasure you value most dearly. Do not be deterred by anything less than a lofty mountain.

Awaroa (Godley Head) is the easternmost end of the Port Hills and marks one of the outer boundaries of Ōhikaparuparu (Sumner). Awaroa was a significant navigational point for Māori as it marked the entrance to Whakaraupō (Lyttelton Harbour). From out at sea the entrance to the harbour looked like the start of a large river which is where Awaroa (meaning long river) gets its name.

Awaroa was also a significant landmark due to it being one of the highest points in Ōhikaparuparu. This elevation was used by Māori as a lookout giving them a panoramic view of the Pacific Ocean and dreams of the world beyond.

The land behind the headland was known as Mahoenui, referring to the large Mahoe (whiteywood) which grew there. Due to the abundance of native bush including ti kouka (cabbage tree) kowhai and totara, Awaroa was the habitat of many birds such as the piwakawaka (fantail), kaka (parrot), karearea (New Zealand falcon) korimako (bellbird) and kereru (wood pigeon). These birds were caught using rore (snares), such as the tāhei, a row of snares tied up with slipknots. The snare would be set next to a place where birds frequently roosted. The birds would stick their necks through the loops, and get caught, and as they struggled, the knot would tighten, and they would be caught there. They would be brought back to the village, before being cooked in the same manner as fish.

Awaroa has been chosen for the Years 7&8 Team as it symbolises our ākonga (learners) reaching the highest point of the school. A journey that started for them at Rapanui. From here they can look out at new opportunities and see all the way to the horizon.

In Awaroa our Year 8 students have grown their feathers and are ready to fly.

Get the SchoolAppsNZ Mobile App